Quick update, the post is 6 years old and we are on iOS 13.0 and the builtin apple keyboard on iOS comes with Swype now, so all of these keyboards reviewed below are rendered unnecessary unless you are going to use them for a different function besides just Swype functionality.

iOS has come a long way since the version 1.0, in fact it has been 8 years since the OS was first launched. To be truly judgemental, version 8 has seen the most exciting features ever since the launch of App store. Since this is a very detailed post on iOS 8 Keyboard Extensions and there are quite a lot of features that shipped with iOS 8, its better you check out the full list of features elsewhere here.

Extensions across iOS has been the most talked about feature of this release, and I have been looking forward to third party keyboard extensions ever since I saw the swipe keyboards on Android. iOS 8 brings keyboard extensions to all iOS 8 supported devices which are iPhone 4S and later models, iPod 5th Generation, iPad 2nd Genartation and later and iPad Mini all versions. Here is how some popular third party keyboards work and how they fare so far in real life. But before that some

Despite all these pain points, some of the keyboards are worth the time, effort and the money, simply because of the time it saves in the longer run and for their ease of use.

There are variety of Keyboards available from Third party developers. Some of the prominent ones are listed and explained briefly.

I have tried most of them and will elaborate on each further below. Before that a brief primer on how to get a third party keyboard activated. Third party keyboards are available as any other app in the store. There is no way yet to distinguish a keyboard app from any other app as of yet, but once you open a keyboard extension app, it just has steps on how to activate the keyboard with some tutorials and settings.
Once you download the keyboard app, just open up settings to activate it. Here is how the navigation looks on my iPhone, should looks the same on your iOS 8 device.

Select the third party keyboard from the list of available keyboards. Some keyboards only work when they are granted full access(to capture all keystrokes, send them over the internet, syncing etc).You might have to grant the permissions by navigating to the select keyboard and enabling full access.If you are paranoid, I would suggest you read the privacy policy of the app before deciding to grant the full access.  That said, I doubt if any developer will be able to gather any data that could potentially harm me. When you grant the full access, You will be greeted with a warning message such as shown below. 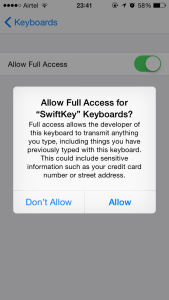 I have called the keyboards that are suitable for all day use as mainstream keyboards. These keyboards can be used as standalone keyboards and work equivalently well like the apple’s default keyboard.

I have classified keyboards that can’t be used as the only keyboard on the device, as supplementary keyboards.

These are early days and iOS 8 isn’t quite smooth, with the way it handles third party keyboards yet. Till may be iOS 8.1 when keyboard handling and switching become smoother, I would recommend you to keep the Apple’s default keyboard turned on at all times and use the third party keyboard of your choice along with the Apple keyboard. My current setup has Swype, Text expander touch, emoji++ along with the Apple keyboard.Yeah I know that is too much of them to handle, but this is optimal for me right now. I am mostly using the Swype most places and the rest do find some infrequent use in special circumstances. What  third party keyboards are you using? Let me know in the comments or on twitter. 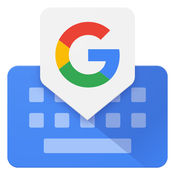 I use Google’s Gboard in addition to Apple’s default keyboards these days. Despite the privacy concerns, Gboard does a really good job of prediciting and accurately matching the swiped words and the GIF search is really fun if you want to spice things up. Emoji support, GIF search and accurate words is what makes this a compelling  must have keyboard. If you are concerned about the privacy reasons, you can turn off Full access in the keyboard settings and that would ideally prevent it from sharing your personal data/words to the mothership :).