The Internet has revolutionized the way we work over the past decade and we are truly gifted to be living in the Internet era. Truth be said it comes with it’s own set of perils.Majority of us whose work involves staring at computer screens, day after day, come to believe checking personal emails, or twitter, or Facebook or the new york times, for a few a minutes during wont change much of anything. It is this small illusion which slowly develops, and you get too casual on a Saturday, and you end up spending your half day surfing the web and doing no productive work. This happens so unknowingly, that it goes without being realized. It happens with everybody (even me, I am no zombie) and it’s nothing new. 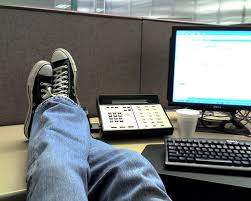 This is no alien thought, it’s something we all know, but we miss it. I realized it when I went through Seth Godin’s post a couple of days back.  He is quoted below.

That way, you’ll have something to show for it.

The biggest waste is to do that thing you call work, but to interrupt it, compromise it, cheat it and still call it work.

In the same amount of time you can expend twice the effort and get far more in exchange.”

If you are in such a situation, where the Internet or your mobile phone with those cricket/ Facebook updates keep you distracted, Remember its like you are trying to fill the bath tub with the drain open. So just think it over you might know where to close that bath tub.